The Limits of High Speed Rail.

Today we celebrate Nnedi Okorafor, a Nigerian-American author of Africanfuturism and Africanjujuism for children and adults. Her works include WHO FEARS DEATH (in development at HBO into a TV series), the BINTI novella trilogy, THE BOOK OF PHOENIX, the AKATA books and LAGOON. She is the winner of Hugo, Nebula, World Fantasy, Locus and Lodestar Awards and her debut novel ZAHRAH THE WINDSEEKER won the prestigious Wole Soyinka Prize for Literature. Her next novel, IKENGA, will be in stores August 2020. 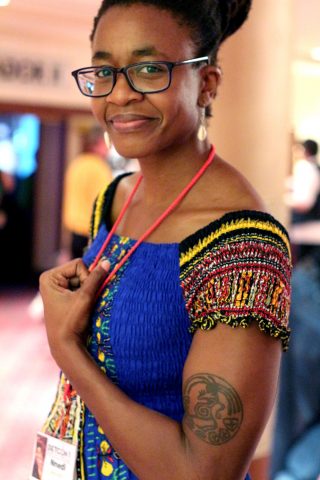 Much of Binti is about the push and pull of family and culture, and what it is and what it means to travel beyond one’s roots and grow while bringing along your roots. Too often, as an American, I see this sentiment that in order to evolve, one must leave family behind, one must leave one’s foundation behind, break bonds, forget the past. I say, “What if you bring family with? Aren’t you more that way?” Yes, it’s a harder road to walk, because you have to travel while carrying the loads of home and the past, and it requires a lot of negotiating and understanding and submitting.

This is the cultural conversation in Binti. She’s constantly asking herself, “Who am I? What am I?”, but always while maintaining that she is Himba. And the Himba people are constantly grappling with this issue, too. Can one move into “modernity” with her culture? What does “modernity” mean? Most of the time it just means assimilating to Western cultures and ideals so you can enjoy technology. What is lost? Who is in control of the direction of “modernity”? Must it always be this way? If not, how? This is an issue I know Africans on the continent and in the Diaspora will have to face in the future, if not already.

If you’re looking for a new wallpaper, a tattoo idea, or just an amazing time scrolling through illustrations from the past, the Biodiversity Heritage Library holds a treat for you. Its thousands of public domain images and digitized books are also educational, collecting observations of the natural world from seven…

Lessons from a puzzle about prime numbers

Doron Zeilberger is a famous combinatorial mathematician based at Rutgers. He is noted for actively using computers in research. His computers even get co-authorship credit under the name “Shalosh B. Ekhad,” which is Hebrew for 3B1—a computer that came from building 3, corridor B, room 1 of AT&T Bell Labs.

Today I thought we would talk about a recent joint paper of Zeilberger on Covering Systems.

This paper has one co-author who is human, Anthony Zaleski, also of Rutgers. It starts with a puzzle about beetles on a circular track. The puzzle does not need a computer to solve—though a computerized visualization would make it more enjoyable. It makes several interesting points, points that are distinctly human, and I hope you might enjoy it.

They ascribe the puzzle to Jean-Paul Delahaye, who modified Peter Winkler’s writeup of a folk puzzle that Winkler stated about ants.

One places nine beetles on a circular track, where the nine arc distances, measured in meters, between two consecutive beetles are the first nine prime numbers,

. The order is arbitrary, and each number appears exactly once as a distance.

At the starting time, each beetle decides randomly whether she would go, traveling at a speed of 1 meter per minute, clockwise or counter-clockwise. When two beetles bump into each other, they immediately do a “U-turn”, i.e. reverse direction. We assume that the size of the beetles is negligible. At the end of

minutes, after many collisions, one notices the distances between the new positions of the beetles.

Note that there are two levels of probability: the initial order of the vector of distances and the initial direction of each beetle. Yet after

minutes there is a high probability of the distances being exactly the same: the first nine prime numbers. Is this a miracle? What is the probability?

The point is we have deliberately stated the puzzle to make it harder. The way we stated it is misleading and the following lessons are hints to help solve the puzzle.

Can You Solve the 'Hanging Cable' Problem, Used as an Amazon Interview Question?
Wednesday February 19th, 2020 at 9:46 PM 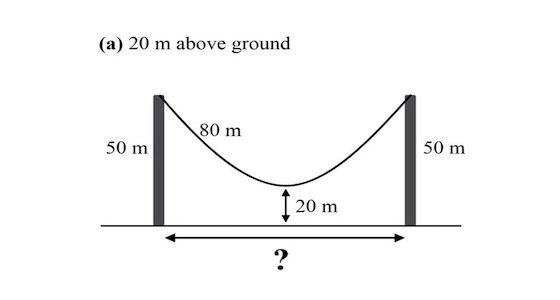 jepler
reply
no, I couldn't do it on the spot. your favorite interview question is dumb.
Earth, Sol system, Western spiral arm

zwol
reply
This is like the company once heard of Fermi problems and has been playing telephone with the concept.

Regardless, if someone sprang this on me I would say “I would have to look up the formula for that, shall I demonstrate my ability to do so?” and if they didn’t accept that I would walk out.

What to do with underground parking by Gordon Price
Wednesday February 19th, 2020 at 8:27 AM

Ian Robertson found one solution in Paris.  From Euroactiv:

In Paris, as in many European cities, the number of cars is declining, which is leaving a vast amount of underground car parks empty. With its start-up project called “La Caverne”, Cycloponics is reclaiming these urban territories and using them as a way of growing plenty of organic vegetables. …

At Porte de la Chapelle in Paris, the two have set up a 3,500 m2 urban farm located underground, in a former car park. …  Gertz and Champagnat responded to call for tenders from Paris, whose empty car parks were squatted by consumers and crack dealers. It’s been more than two years now since ‘organic has replaced crack’, and about fifteen jobs have been created. …

Small packets of water-soluble, sterilised and packaged straw are hung from floor to ceiling, and the mushrooms grow through tiny holes. Everything is calculated to ensure their optimal growth. The air is saturated with moisture, the endives grow in the dark, and the mushrooms get a few LED lights.

But the car park has definite advantages over the limestone cavities usually used to grow mushrooms, as there is a permanent and precise control of the weather, as well as better thermal stability. …  Farming in car parks also makes it possible to better resist the climate crisis. Parasites and other insects, for instance, are rather rare in the subsoil, even if endive tubers and straw bought outside can also be vectors of diseases, such as sclerotinia, which destroyed part of this year’s endive harvest. …

“In Paris, as in many European capitals, people no longer have cars, there are too many parking lots, especially in the poorest districts. But we also visited unused car parks on the Champs-Elysée. It would be possible to do something about it!” according to the entrepreneurs.