Seesaw is an open source microcontroller friend for other chips. It provides a variety of capabilities such as UART, ADC, DAC, extra GPIO, etc. to chips that don’t have them. We’ve used the SAMD09 for seesaw for years, and it’s been great. But now we can’t find any SAMD09 on the market for a year or two – so it’s time to redesign! We’re going with the ATtiny817 and megaTinyCore https://github.com/SpenceKonde/megaTinyCore with great success so far! – video.

The sharp-eyed camera on NASA’s Mars Reconnaissance Orbiter has spotted China’s Zhurong rover on the Red Planet, showing the craft next to its landing platform, with pieces of its heat shield and parachute nearby.

The High Resolution Imaging Science Experiment, or HiRISE, instrument on the NASA orbiter is the largest telescopic instrument ever flown to another planet. The camera has captured views of NASA’s rovers and landers on Mars, but the images of the Zhurong rover is the first time HiRISE has seen an intact Mars lander from another country.

Flying in orbit averaging around 186 miles, or 300 kilometers, above the planet, MRO’s HiRISE camera acquired its first image of the Chinese rover June 6.

“Clearly visible are what we interpret as the lander surrounded by a blast pattern, and the rover itself a bit to the south after it descended from the lander,” the HiRISE science team wrote.

The HiRISE instrument was built by Ball Aerospace and is managed by a team at the University of Arizona. The camera’s telescope measures about 19.6 inches (50 centimeters) in diameter. From the orbiter’s altitude, the HiRISE camera produces images with a pixel size of about 12 inches (30 centimeters).

The Zhurong rover landed May 14 in southern Utopia Planitia, a broad plain in the northern hemisphere of Mars, making China the second nation to successfully land and operate a spacecraft on the Red Planet.

Designed for a three-month mission, the six-wheel robot drove down a ramp from its stationary landing platform May 21 (U.S. time) to begin exploring the Martian surface.

MRO’s HiRISE camera imaged the Zhurong rover just south of its lander. Part of the lander’s aeroshell and parachute are visible farther to the south in the image below.

The rover weighs about a quarter-ton, as measured in Earth’s gravity, and stands about 6 feet (1.8 meters) tall. The Chinese craft is slightly larger than NASA’s defunct Spirit and Opportunity rovers, which landed on the Red Planet in 2004. Zhurong is significantly smaller than NASA’s Curiosity and Perseverance rovers currently driving across the surface of Mars.

MRO’s HiRISE instrument has captured views of the NASA rovers on Mars, and taken perfectly-timed pictures of U.S. spacecraft descending to the Red Planet’s surface under parachutes.

In addition to three-dimensional cameras and a subsurface radar to search for underground water ice, the Zhurong rover carries sensors to measure the composition of Martian rocks, a magnetic field monitor, and a weather station to collect atmospheric data at the Utopia Planitia location.

I've been using Bullseye for a few weeks on my main computers and there was just one hiccough with printing. besides that, it's been solid for me (xfce desktop; one AMD, one NVIDIA, one Intel video)
Earth, Sol system, Western spiral arm

For the last month or so, the IRC world has been embroiled in drama over the new ownership of Freenode. For me, it culminated yesterday when I was banned from Freenode.

I’m not going to try to recap what happened in detail, but I can give you my overall perspective on it. The new owners started on the wrong foot, and then mishandled every subsequent interaction. At every turn, people feared the new owners and staff were going to do something malicious. Then something bad would happen, people would say, “look: malice!,” and the new staff would say, “it wasn’t malice, it was a mistake!” Then it would happen again.

A month ago, when the new trends were becoming clear, the operators of the #python channel (including me) decided to move #python to the new Libera.chat network being run by the old Freenode staff. But we also stayed in the Freenode channel to let people know where everyone had gone.

Yesterday, after a heated debate in the Freenode channel where I was accused of splitting the community, I got k-lined (banned entirely from Freenode). The reason given was “spamming”, because of my recurring message about the move to Libera. Then the entire Freenode #python channel was closed. So much for caring about the community.

Was it malice or was it mistake? Does it matter? It’s not a good way to run a network. After the channel was closed, people asking staff about what happened were banned from asking. That wasn’t a mistake.

I can’t claim to know the minds of the new Freenode owners or staff. All I can do is see their actions, or I could until they banned me from Freenode. I know that some of the new staff are people we had come to know over the years as persistent disrupters in #python. The people advocating for the new Freenode staff seem to trend towards the anti-code-of-conduct, “free speech means I don’t have to care” cohort. And the new staff seems to be using force to silence people asking questions. It’s clear that transparency is not a strong value for them.

Setting aside network drama, the big picture here is that the Freenode #python community isn’t split: it’s alive and well. It’s just not on Freenode anymore, it’s on Libera.

Freenode was a good thing. But the domain name of the server was the least important part of it, just a piece of technical trivia. There’s no reason to stick with Freenode just because it is called Freenode. As with any way of bringing people together, the important part is the people. If all of the people go someplace else, follow them there, and continue.

See you on Libera.

[I thought I was done sharing stoies about freenode's descent into the dustbin of history, but this one's about #python]
Earth, Sol system, Western spiral arm 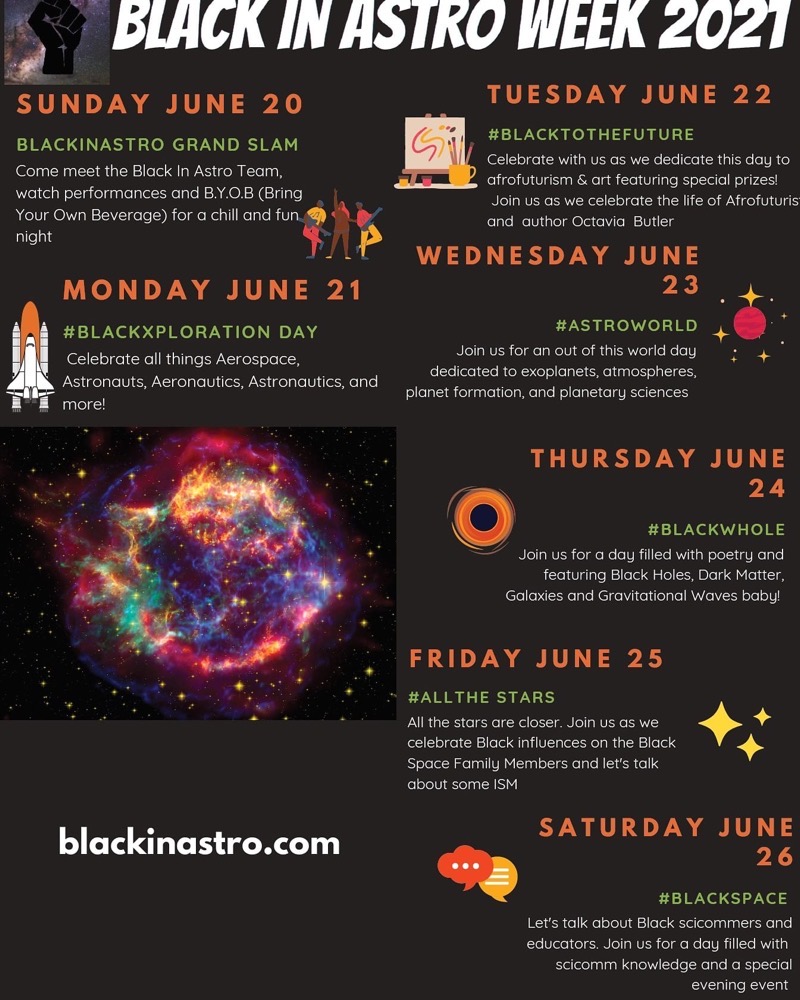 Black In Astro week is June 20 – June 26. Check out https://blackinastro.com and @BlackInAstro on twitter.

Each year on this date, "Loving Day" celebrates the historic ruling in Loving v. Virginia, which declared unconstitutional a Virginia law prohibiting mixed-race marriage — and legalized interracial marriage in every state. (Previously.)