At first glance, this gorgeous retro-styled audio player built by [Max Kern] could absolutely pass for the genuine article. But then you take a closer look and realize that the “tape” it’s playing is actually an animation running on a 320 x 240 IPS display, and the Play and Rewind buttons on the front aren’t the chunky electromechanical affairs of yesteryear but actually cleverly repurposed MX keyboard switches. 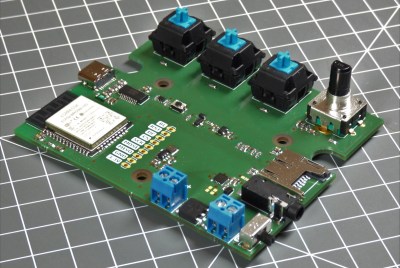 By now you’re probably realizing that this player is quite a bit smaller than you first imagined, which in turn, means that it even its case is a modern fabrication. While it might perfectly encapsulate the look and feel of a piece of 1980s consumer electronics, it was squirted out on a thoroughly modern desktop 3D printer.

Even so, [Max] made sure to include draft angles in the CAD design and and a distinctive separation line so the case looked like it was injection molded. Following similar logic, he decided against using a modern rechargeable battery pack to power the electronics, opting instead for a more era-appropriate set of AA batteries.

In terms of hardware, the custom PCB is home to an ESP32 WROOM, a MAX98357A I2S audio amplifier, a FT231XS USB-to-serial chip, with enough passives and regulators to keep them all well fed and happy. The ESP32 has more than enough computational horsepower to chew through MP3 files, which are conveniently loaded via an SD slot built into the side of the player. As the player was actually intended for audio books, onboard playback is limited to a mono speaker; though there is a 3.5 mm audio jack to plug in a pair of headphones for when the built-in speaker isn’t up to the task. 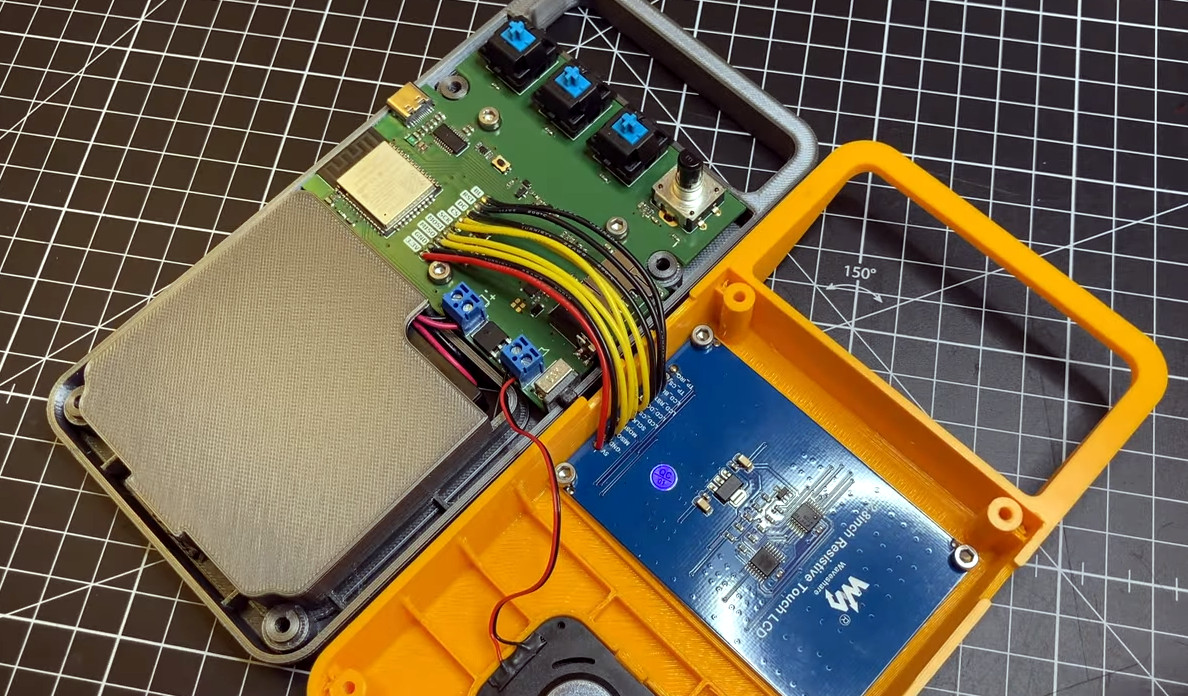 Check out the video after the break to see how the player is assembled, as well as a demonstration of its simple three-button user interface. It looks like a joy to use, though the lack of fast forward and rewind sound effects took us a bit by surprise given the otherwise impeccable attention to detail. We’ll assume there’s some technical limitation that makes this particularly difficult to implement, and that their absence is currently keeping [Max] up at night.

As impressive as the final product is, we can’t say it’s a surprise. Frankly, we wouldn’t expect anything less from [Max] at this point. His adaptive OLED macro pad wowed us back in 2020, and his ZeroBot is still one of the slickest designs for a DIY two-wheeled robots we’ve ever seen.

"I want people to look at me as an autistic person and say, "You are not like me, and that is fine, and you are still a person." That, to me, is the ultimate goal of all disability activism: to create a kinder world where there is no standard for what being a "real person" entails and basic respect is afforded to everyone because of their intrinsic value as a living being." 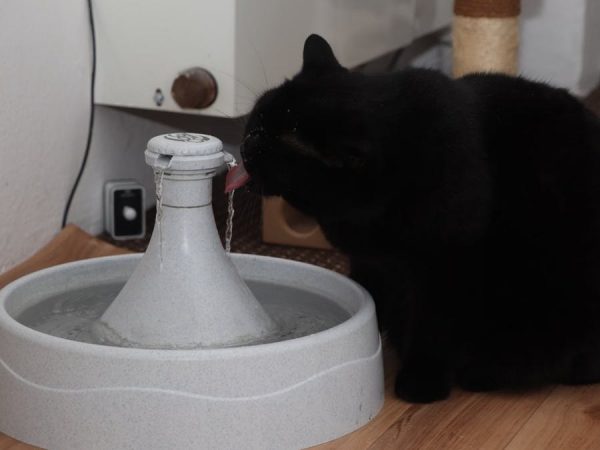 Every cat wants to do almost everything on by themselves anyway, so here’s a project that will allow your cat to set their own water in motion, from vladimirm  via hackster.io

A quick way to control a water fountain for a cat only when the cat is nearby using BigClown and Home Assistant.

When PIR sensor detects movement it sends message to Radio Dongle plugged to the Raspberry Pi which sends the message to the MQTT server. On the other side MQTT message is processed by the Home Assistant which then using the automation triggers smart plug and starts configured countdown.

Each Friday is PiDay here at Adafruit! Be sure to check out our posts, tutorials and new Raspberry Pi related products. Adafruit has the largest and best selection of Raspberry Pi accessories and all the code & tutorials to get you up and running in no time!

jepler
reply
I always intended to do a project like this for my kitties!
Earth, Sol system, Western spiral arm

sfrazer
I thought about something like this for my cat but went with this instead: https://aquapurr.com/ it has an advantage of not needing filtration. If you're handy with proximity sensors and solenoids you could probably DIY it?

jepler
Oh dang, my cats would both have loved that. Sadly, they're no longer with us.

1 Comment
Intel is seeking to be paid interest of $624 million on the overturned $1.1 billion fine it received from the European Commission back in 2009. From a report: The antitrust ruling was overturned at the beginning of the year, and so Intel has gone to EU General Court seeking compensation and interest on the fine. In fact, Intel is claiming back almost half of that original fine, based on the European Central Bank's refinancing rates. In case you need a reminder on all of this: Intel allegedly took part in anti-competitive practices that saw it offer conditional rebates to key OEMs such as Dell, HP, and Lenovo, making it difficult for competitors (read AMD, or ARM if you prefer, but really AMD) to compete with their own CPUs. The European Commission concluded in 2009 that Intel had indeed behaved in such a way between October 2002 and December 2007 and hit it with one of the largest ever fines at the time at a cool $1.1 billion. Intel appealed the decision unsuccessfully in 2012, but in 2014 it brought the case to the European Court of Justice, which sent it back to the General Court in 2017. The case has been going back and fourth ever since.

jepler
reply
good interest rate if you can get it
Earth, Sol system, Western spiral arm

1 Comment
Desperate to cure Rukiya's worsening disease, M'Benga is confronted with the mystery of the Enterprise's unexpected trip to Ye Olde Costume Department.

&bullet The cover of the book The Kingdom of Elysian indicates its author is Benny Russell, a character in two episodes of Deep Space Nine.

"The Swamp of Infinite Deaths."
"Oh, that is not a good swamp."
- Pollux (Spock) and Sir Rauth (Pike)

Poster's Log:
This episode was a real litmus test for this amazingly strong first season. The "costume episode" is verrrry well-trod Trek ground—TOS, TNG, and VOY had many, DS9 had like one or two (ENT's closest was probably "Mirror Darkly")—but it's always seemed to me that they were more often misses than hits. "Elysian Kingdom," unlike most of them, has serious emotional resonance: after the initial scene, we know (because of general TV narrative tropes) that M'Benga being king will somehow involve Rukiya and her illness, and that helps carry us over some of the "yes, yes" scenes like those in Queen Neve's "throne room." And the fact that the plot's outcome is a little predictable is offset by the powerful resolution scene in M'Benga's quarters, which again recalls DS9: "The Visitor" in impact, but with a happier flavor.

Also skillful: not using a story we all know for this, like Robin Hood or whatever. The writers rightly understood that that story isn't the one that matters, and treated it more as setting than narrative. Yet we are prevented from confusion and excessive story slowdown by M'Benga's helpful little flashbacks (during which I half expected to see Khitomer conspirators). Hemmer was a great choice for his helper here, too (the protagonist of these Trek stories always gets a helper!); we haven't gotten to know him well enough for his Elysian-role to reflect amusingly on his non-Elysian self (as Pike's does), but also, he needed to get a lot to do because we haven't gotten to know him well.

Do you suppose they meant for Pollux's costume to make him look like Sarek?

I don't think DS9 ever clearly suggested whether or not Benny Russell actually existed in the Trek timeline, but this episode establishes that he did. Very cool, and thought-provoking.

Poster's Log, Supplemental:
IIRC, previous depictions of the "warp bubble" concept have suggested the phenomenon to be exotic, rather than a routine element of warp engine operation, as implied here; those sufficiently interested may consult the MA pages warp bubble and static warp shell.

I haven't been tracking them closely, but it feels like this show's tearing through the stardates. IIRC we had one that was 19-something pretty recently, and this one is stardate 2341.6 (but then, trying to figure out what stardates really mean has always been a bit of a fool's errand).

Speaking of the tropes of TV narrative: "'Star Trek: Strange New Worlds' Is the Best of What Television Used to Be" (Vice)
Read the whole story

jepler
reply
I hope you're enjoying SNW as much as me.
Earth, Sol system, Western spiral arm

You need a Windows 11 ARM64 product key. Technically, there was nothing that prevented you from using any Windows 11 key to do this, as Windows product keys are not architecture-specific, so you can use the same key with x86 (RIP), x64, and ARM64 OSes. But Microsoft made statements via spokespeople saying this wasn’t supported. For example, this article on the Verge contained a quote from Microsoft:

“Microsoft only licenses Windows 10 on ARM to OEMs,” says a Microsoft spokesperson in a statement to The Verge. We asked Microsoft if it plans to change this policy to allow Windows 10 on ARM-based Macs, and the company says “we have nothing further to share at this time.”

Fortunately, they had something to share later, again through an official Microsoft spokesperson (that faceless PR-driven process where press or analysts can ask Microsoft for an official response to a question). A lengthy Twitter thread on the topic (driven by a new ARM64-based mini-desktop computer that ships with Windows 11 but without a license — until that was changed by the manufacturer of the device to say that it did indeed include a license) pointed to a blog post from Wes Miller, an analyst and licensing expert with Directions on Microsoft. That post included this quote:

Yes customers can use retail copies to run Windows 10/11 on Macs, including ARM Macs. The Windows retail EULA does not have any use rights restrictions on the type of device you install Windows on. Note that the EULA does stipulate that not all versions of Windows are supported on all device types, so theoretically customers could run into compatibility issues with performance & support case by case, but this is not a licensing restriction. Customers can find more details on compatibility at https://aka.ms/minhw.

jepler
reply
> Yes customers can use retail copies to run Windows 10/11 on Macs, including ARM Macs. The Windows retail EULA does not have any use rights restrictions on the type of device you install Windows on. Note that the EULA does stipulate that not all versions of Windows are supported on all device types, so theoretically customers could run into compatibility issues with performance & support case by case, but this is not a licensing restriction. Customers can find more details on compatibility at https://aka.ms/minhw.
Earth, Sol system, Western spiral arm